The "JAWS" of the Insect World

Similar to the menacing shark in the 1975 film "JAWS", the giant water beetle, residing in North and South America, is truly an apex predator of the swamplands. Measuring nearly six inches long, this gigantic beetle is not limited to the water because it actually can breathe air. The most insane things about it is that it can also spread its wings and fly, making it one of the only animals on the planet that can swim with amazing control, inhabit the land, and soar in the skies.

With its paddle-like legs, the giant water beetle is able to catch just about anything that it wants. With the help of its beak-like mouthparts and it's strong venom the beetle swiftly strikes it's prey while inserting its beak into the struggling animal and intern injecting the venom, shutting downs its nervous system and turning the insides of the prey into a liquid. The bug than slurps up the nutritious juice just like a smoothie!

As you can see from this picture, the beetle will eat literally anything that it can get its JAWS on. It will eat any kind of insect, fish, tadpole, frog, and even a small turtle! 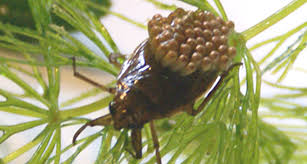 Another unique feature of this creature is their instinct to protect their young. In order to keep its young safe, the female carries the eggs on its back until they are ready to hatch.

Although these insects are not responsible for any human deaths they are called "Toe bitters" for a reason. They have one of the most powerful and painful bites of any insect. They have certainly earned the name "The JAWS of the pond".