by Bradon Coy on May 4, 2018
Tweet
Being in the genus of Atta and Acromyrmex leaf cutter ants inhibit the rainforests of central and south America. There are currently 27 species of leaf cutter ants discovered. These ants are called leaf cutters because they march around the rainforest looking for leafs to cut with their sharp mandibles. When the ants are first born in the nest they have very sharp mandibles. Over time, their mandibles get dulled from use. The ant colony doesn't just discard the dulled ant but instead uses them for carrying the leafs. They use the young sharp ants for cutting the leafs then they use the older dull ants to carry the large leafs back to the nest. 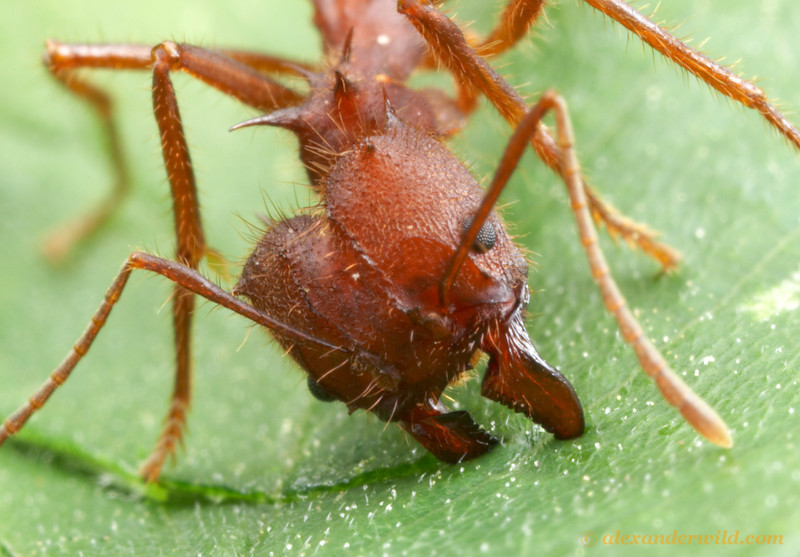 They also have another kind of ant in the colony. These ants are called majors or soldiers. They are huge and built like tanks to defend the nest. They are also used like taxi cabs to carry around the smaller ants. These ants are one of the only animals besides us that farm! These ants cut the leafs to feed their livestock. In the center of the nest there are large masses of a species of fungus. This fungus only lives in these ant nests. They bring the cut up leafs into the nest and place the clippings of leafs on the fungus. This feeds the fungus making it grow larger. They then eat this fungus and feed it to the queen, workers, and brood (Larvae). Every ant in the colony has a unique job. Some work in the nursery and care for the brood. Some are leaf cutters. Some are leaf carriers. Some are farmers and just help farmthe fungus. Leaf cutter ants even have a specific species of weed that tries to eat their fungus. Leaf cutters even have a solution for the weeds! On the farmers thorax they have a small white patch of a special bacteria that lives on the ants. This bacteria actually eats the weeds! A leaf cutter ant colony is a very delicate balance of life.